Vote like our lives and our country depend on it

What more is there to say after all these months?

Only this: Vote like your life, future generations, and our country depend on it, because they do.

Pray for the candidates.

Pray for the volunteers.

Pray for our country.

Here are a few items to read as we await the results.

1- We are not buying the narrative the left has been shoving at us for the past two years.

QUOTE: With only a few days left until the 2022 midterms, Newsweek laments a new poll by Redfield and Wilton Strategies showing that 40 percent of Americans still believe that the 2020 presidential election was “rigged or stolen.”

This is presented as a shocking revelation about the number of Americans who still buy into the “Big Lie,” despite its “being proven false,” according to the article.

One way to characterize these data is the manner in which Newsweek does, which is to suggest that a horrifying 40 percent of Americans believe in what a bipartisan mainstream media blitz has promoted as “the Big Lie” for nearly two years.

In other words, fewer than one in four Americans is confident that the election was legitimate and is completely flummoxed as to how anyone could question its integrity.  That’s a remarkable figure, standing athwart the message being delivered by the senile occupant of the Oval Office, who routinely argues that anyone who questions that election’s integrity is not only a fringe radical, but an enemy of democracy and a potential insurrectionist.

We Americans aren’t buying that narrative because it’s obviously not true.  We saw it with our own eyes.  And in case we didn’t see it, we were told by the conspirators who bragged about rigging the election while they did their victory lap.

2- Democrats have tried to hijack the word “democracy”.

Democrats Are Failing the Democracy Test

QUOTE: This Tuesday, as Joe Biden and the Democrats love to remind us, “democracy is on the ballot.” It’s just not in the way they think it is.

As Americans head to the polls on Tuesday, it is Democrats who are constantly reminding us of the virtues of American democracy, and how much that democracy is under threat from “ultra MAGA Republicans.” These deplorables routinely foment “insurrections,” deny people their right to vote, contest election results, and exult in hitting their enemies over the heads with hammers.

In other words, Democrats’ closing argument in the 2022 election asks—actually, it insists—that Americans assume that the mild-mannered Republicans they encounter in daily life are actually bloodthirsty fascists. Good luck with that!

The irony here is that Democrats themselves are attacking the foundations of democracy in so many ways, from their contempt for the “legitimacy” of the Supreme Court, to their advocacy and practice of federal government-Big Tech collusion to censor dissenting viewpoints, to their suppression of accurate, but critical, reporting on prominent Democrats, to their blithe acceptance of Mark Zuckerberg’s unprecedented financial and logistical intervention in the conduct of the 2020 election. And we haven’t even mentioned the rank absurdity of the Democrats’ central argument this election season: that only by ruling out of bounds the opposition party, and turning America into a one-party state, can we save “democracy”—as though pluralism and democracy had nothing to do with one another!

On Tuesday, as Biden and the Democrats love to remind us, “democracy is on the ballot.” It’s just not in the way they think it is. The question Americans should be asking is: Will this country be ruled by the people, or will it be ruled instead by an elite of self-appointed “experts” and paragons of wokeness who talk down to us, and mock and intimidate us when we dare to dissent?

It’s your country, my fellow Americans. So it’s you who will decide the answer.

3- The work continues to stop fraud.

QUOTE: Absentee ballot fraud has been uncovered in a 2022 midterms battleground state. The alleged plot involves a Milwaukee election official requesting military ballots and sending them to a Republican lawmaker.

A Milwaukee election official could face criminal charges accusing her of fraudulently requesting absentee ballots reserved for members of the military.

“Milwaukee Election Commission Deputy Director Kimberly Zapata, 45, of South Milwaukee was fired by Milwaukee Mayor Cavalier Johnson this week after Johnson discovered she had requested the ballots,” the Milwaukee Journal Sentinel reported. “Johnson said Zapata’s actions may have been to show voter fraud was possible.

“This has every appearance of being an egregious and blatant violation of trust,” Johnson said. “Election integrity is absolutely integral. It’s absolutely essential.

The report confirms that absentee ballot fraud is actually an issue that Americans should be concerned about, contrary to media narratives about the 2020 election.

4- Watch the video at the link. It will make you smile.

Video: Right When Fetterman Introduces Obama As A “Sedition Free” President, All American Flags Fall Over As If God Looked Down And Said “Not Today”

QUOTE: John Fetterman took his little podium, and it was as if God himself, looked down, and said “Not Today,” and just blew down every single American Flag in sight.

Right when Fetterman introduces Obama as a “sedition free” president, all the American flags fall over. 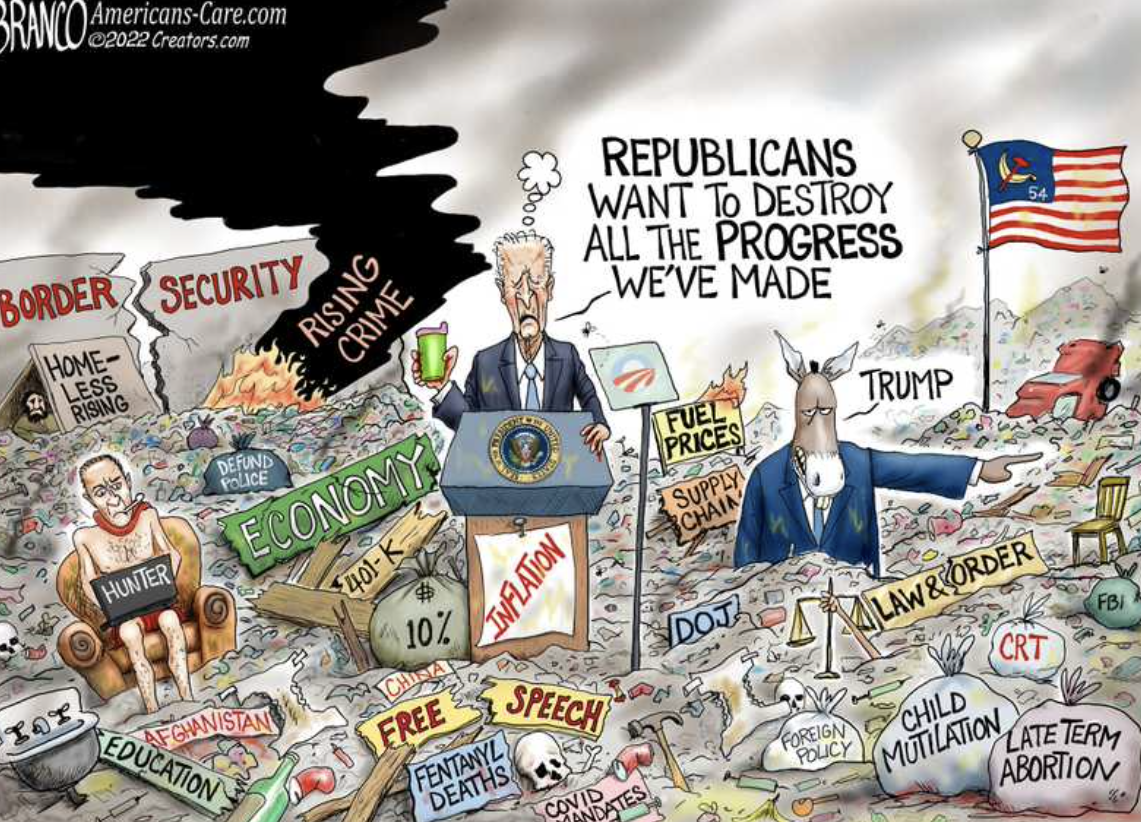