Earlier this week, Sidney Powell was a guest on the Brannon Howse show on FrankTV.

Sidney discusses a range of issues including when we may soon get more information on Dominion.
Sidney on FrankTV on RUMBLE 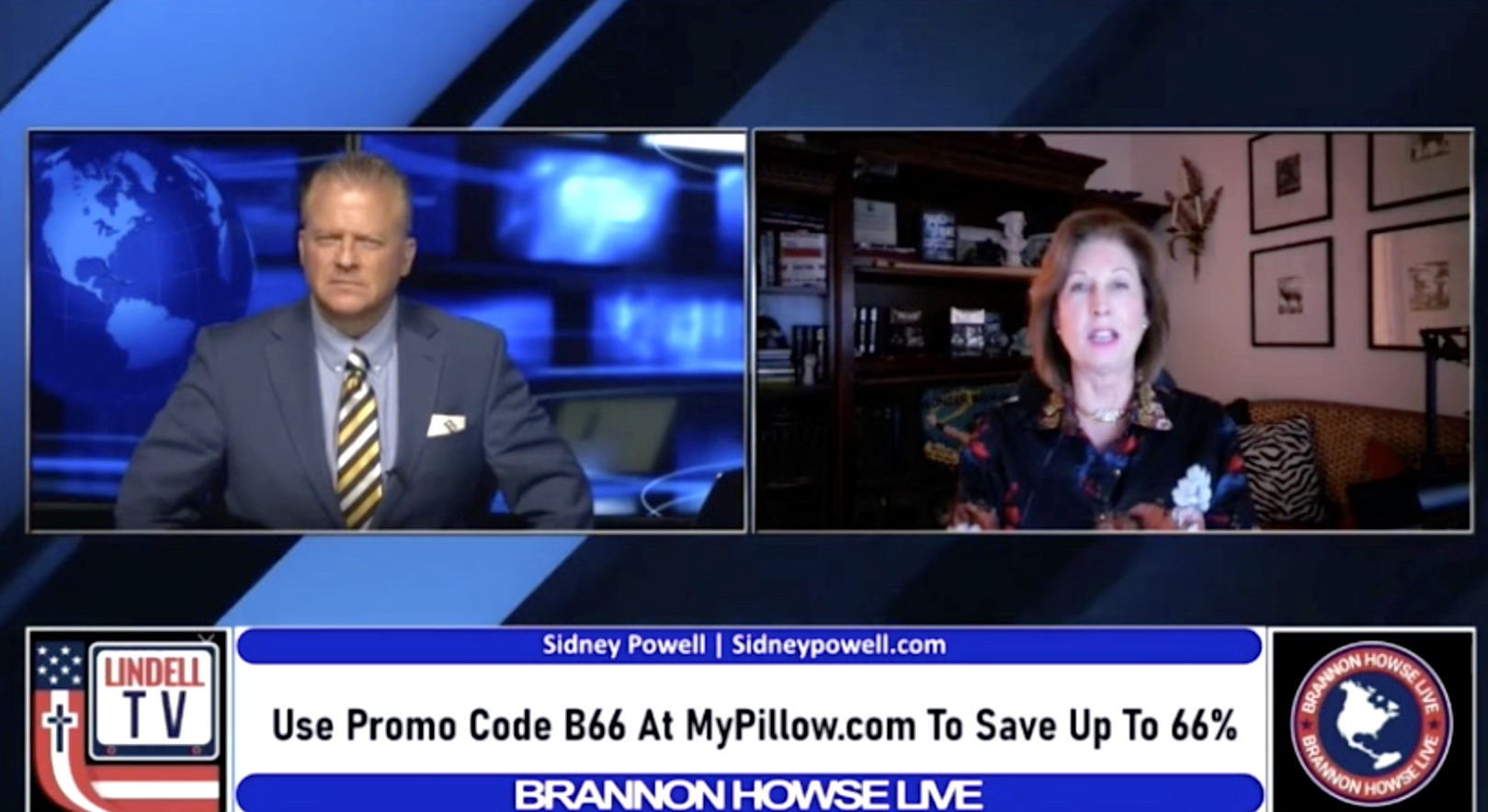 1- Once again the great Governor of Florida gives a Master’s Class on “How Republicans Should Govern”.
Red State

QUOTE: At what point do people stop doubting Ron DeSantis? The critics said the Florida governor couldn’t win the battle over Critical Race Theory. They said he couldn’t ban mask mandates in schools. They said the Parental Rights in Education law would be his undoing. And yet, DeSantis just keeps coming out smelling like roses, and the latest example of that may be one of his most important victories yet.

The battle over redistricting has raged in Florida for months now, with even Republicans in the legislature doing their level best to surrender and hand Democrats a nearly status-quo result. DeSantis, on the other hand, stood up and said he wasn’t going to allow the GOP to fold. In the face of immense pressure, he vetoed the legislature’s map, setting up a standoff. Who would blink first?

Well, we have an answer. DeSantis just scored a knockout on the question of redistricting

They said he couldn’t win this fight, but once again, the Florida man has proven his doubters wrong. In practice, that means the GOP will end up with a likely 20-9 or 21-8 advantage now instead of the 17-12 or 18-11 seat advantage the Republican-led Florida Senate originally tried to shove through. Further, it means the ridiculous racial gerrymander in the northern part of the state, which stretched for 200 miles is almost certainly history. After all, it was FL-5 that brought about DeSantis’ veto in the first place. The governor’s office will now submit a map they feel is legal and fair, and the legislature will have little choice but to pass it.

QUOTE: Hillsdale College plans to add at least 50 public charter schools with an “anti-woke” curriculum focused on “the centrality of the Western tradition.”

Tennessee Governor Bill Lee has set aside $32 million in public funds to start the schools.

Hillsdale college , which has close ties to Trump, developed the “1776 curriculum” which portrays America as “an exceptionally good country” and was set up in direct contrast to the NY Times progressive “1619 project.”

Governor Lee told lawmakers “For decades, Hillsdale College has been the standard-bearer in quality curriculum and in the responsibility of preserving American liberty.””I believe their efforts are a good fit for Tennessee,”  he added.

3- Many people are fighting for their rights.
FoxBusiness

QUOTE:  A “Defeat the Mandates” rally in Downtown Los Angeles Sunday afternoon drew thousands of protesters and a lineup of speakers who shared their stories about refusing to obey COVID-19 vaccine mandates.

Among the many speakers was United Airlines pilot Sherry Walker, who says she was forced on unpaid leave and prohibited from accessing her 401(k) benefits for her refusal to take the vaccine.

Walker, with help of two other people, led more than 2,000 United Airlines employees in a lawsuit against the company for “discriminating, and retaliating against the unvaccinated, and forcing them on unpaid leave.”

The courts ruled in their favor in February, but Walker, through Airline Employees 4 Health Freedom (AE4HF), the organization she co-founded, is helping airline employees get back to work. She said her case was far from over.

QUOTE: A new study has graded states by how well they handled the coronavirus pandemic and its subsequent restrictions and lockdowns, showing a stark contrast between liberal and conservative states.

The Committee To Unleash Prosperity study compared state performance on metrics including the economy, education, and mortality from the virus, and examined how states and their respective governments handled the pandemic response.

“Shutting down their economies and schools was by far the biggest mistake governors and state officials made during COVID, particularly in blue states,” Steve Moore, co-founder of the Committee to Unleash Prosperity, told Fox News Digital. “We hope the results of this study will persuade governors not to close schools and businesses the next time we have a new virus variant.”

New York, California, New Jersey and Illinois were among the worst in dealing with the coronavirus, performing “poorly on every measure,” the report said.

These states “had high age-adjusted death rates; they had high unemployment and significant GDP losses, and they kept their schools shut down much longer than almost all other states,” the report added.

The study also found no correlation in those states that enacted stringent travel, vocation and dining restrictions with lower death totals.

5- A must read article by Julie Kelly on the shocking details of the FBI involvement in the so-called kidnapping of Gretchen Whitmore.
American Greatness

QUOTE: On October 8, 2020, Michigan Governor Gretchen Whitmer announced shocking news: federal authorities had arrested several men for conspiring to kidnap and possibly kill her before Election Day. After indulging in a moment of self-pity, Whitmer quickly pinned the blame on President Trump, a man with whom Whitmer had engaged in a very public feud throughout 2020 over pandemic-related lockdowns.

Trump, Whitmer claimed, fueled the rage of alleged white supremacists and right-wing militias responsible for the dastardly abduction plot. “When our leaders meet with, encourage, or fraternize with domestic terrorists, they legitimize their actions,” Whitmer said in a televised speech. “And they are complicit.”

Earlier that day, Michigan Attorney General Dana Nessel, also a Democrat, and officials from the U.S. Department of Justice detailed the charges in a separate press conference. “Last night, the FBI and Michigan State Police arrested six individuals charged in a criminal complaint with conspiring to kidnap the governor of Michigan, Gretchen Whitmer,” explained Andrew Birge, assistant U.S. Attorney for the Western District of Michigan. The defendants, Birge claimed, plotted to kidnap Whitmer from her vacation cottage “before the November election.”

His office took the lead in prosecuting the six defendants, who also faced weapons of mass destruction charges.

Exactly 18 months to the day, Birge’s prosecutors suffered a humiliating defeat in a Grand Rapids courtroom after a jury acquitted two of the men and deadlocked on the guilt of two others. (Two defendants pleaded guilty and testified for the government during the three-week trial). Despite endless resources and favorable rulings by the judge overseeing the case, the government failed to secure a single conviction in what the Justice Department considered one of its largest domestic terror investigations ever.

6- This seems like a great way to run an election!
Gateway Pundit

Voting in France is on Sunday: NO Mail-in Ballots, NO Dirty Voting Machines, Only Paper Ballots and EVERYONE Must Show a Voter ID

QUOTE: Democrats could never make it in France. They can’t cheat.

Voting in the French presidential election is Sunday. There are NO mail-in ballots. There are no dirty voting machines. Only paper ballots are used. And EVERYONE must show a voter ID.

In France, the ballots are counted by hand and the winner is announced by the end of the day.

ABC News reported:
French voters in Sunday’s presidential election will use the same system that’s been used for generations: paper ballots that are cast in person and counted by hand. Despite periodic calls for more flexibility or modernization, France doesn’t do mail-in voting, early voting or use voting machines en masse like the United States. President Emmanuel Macron is the clear front-runner, though an unprecedented proportion of people say they are unsure who they will vote for or whether they will vote at all.Voters must be at least 18 years old. About 48.7 million French are registered on the electoral rolls of the place where they live.

Voters make their choices in a booth, with the curtains closed, then place their ballot in an envelope that is then put into a transparent ballot box. They must show photo identification and sign a document, next to their name, to complete the process.

Thank you again for your outpouring of support this week.   We feel your prayers and are buoyed by your confidence.