Just in time for all of your summer events, we have the perfect shirt for the whole family.
Show your pride and conviction in an All-American shirt!
Purchase at this link. 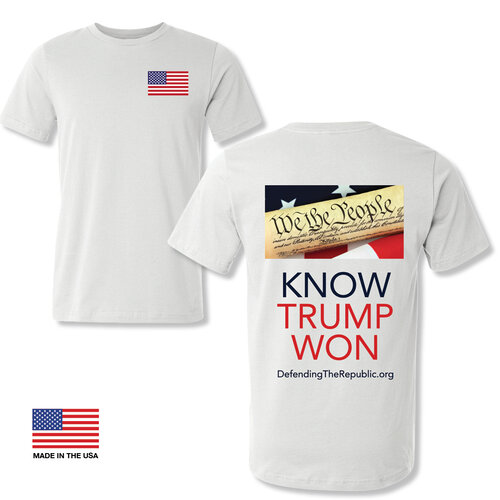 In the latest news from the Peach State, specifically Fulton County, a judge on Thursday dismissed seven of nine claims in an election lawsuit, but allowed two to proceed.

“We are pleased that the court has ruled in our favor again for the fifth time. The ruling substitutes Defendants by replacing currently named government organizations with individual board members we named originally in our lawsuit. It also moots Don Samuels’ attempt to dismiss our case. This continues the string of victories we have including how we obtained the original protective order, conditional approval to inspect ballots, access to ballot images, and the order to unseal the ballots.”

“This is a huge victory for everyone who wants to get to the truth about the way in which Fulton County mishandled the absentee ballot count,” Bob Cheeley, lead attorney for two of the petitioners, told Just the News.

2: There’s a Nuclear Earthquake Coming Out Of AZ. WAR ROOM—June 25–

Former special assistant to Trump, Boris Epshteyn, who has been following the Arizona election audit closely, revealed Friday morning on the show that there’s a ‘nuclear earthquake’ coming out of Arizona with the forensic results.

Democrats appear to be in panic mode over it, knowing the truth is coming out and they can’t stop it. All the early attempts to prevent the audit in Maricopa County failed, so now they’re turning their attention to what could soon be coming out of Georgia, which is believed to be far worse than Arizona.

“In Arizona, they’re now doing quality control, in fact, they’re triple checking the count now, for what I’m hearing is that the concerns (AZ state auditor) Karen Fann laid out in her letter over a month ago now and the deep issues of missing ballots, and issues of replaced/removed/repositioned databases, remain issues today, Epshteyn said, who is close to the audit. “Soon enough, we’re going to see some public information that’s going to be a nuclear earthquake in terms of what’s coming out of Arizona,” Epshteyn added.

The report below shows a comparison between the Presidential results recorded for Pennsylvania and Georgia in the 2020 Election.  Per a review using the Edison data released after the election, the report shows tabulations in the election which are far too consequential.

We have promised to give you information from Sidney concerning all legal matters. Here are two things we wanted to update you on.

Sidney and Defending the Republic appeared in federal court in DC Thursday, June 24, on their motions to dismiss Dominion’s defamation claims. The judge heard arguments from all parties and advised he will write his decisions on the various purely legal issues of jurisdiction and pleadings.

Meanwhile, the Democrat Florida Commissioner of Agriculture is political grandstanding on what is a simple administrative issue regarding the inception of Defending the Republic. The law firm representing Defending the Republic has been in communication with that office.  Many of the statements made by the Florida commissioner are themselves erroneous or a misunderstanding.

We will keep you in the loop as these issues progress.