The tide is turning

We have been talking about the ramifications of Covid-CCP and the vaccine for this past year as we knew this was a massive effort to remove American citizens from their God-given rights and freedoms.

We have used our resources to help many people fight the legal battles that have arisen.

Often we felt we were yelling into the wind, but it was important to pass on to you better and different information regarding Covid-CCP.

It seems that many more Americans are finally coming to the realizations we have been sharing. We remain hopeful that this is trend that will continue.

This is where you become important!  Please share information on this subject.

1- We will NOT backdown at Defending The Republic!

Making matters worse, the federal contractor requires workers to take experimental and unapproved vaccines. The only “approved” COVID-19 vaccine is Pfizer’s Comirnaty, which is unavailable according to the latest government reports. To be in compliance with this mandate, workers must receive vaccines that are “authorized” based on limited safety and efficacy data. As we have already seen, these vaccines are historically dangerous, causing serious health consequences such asmyocarditis, pericarditis, and even death.

American workers deserve better and we will be there to fight for their right to decline federally mandated injections. 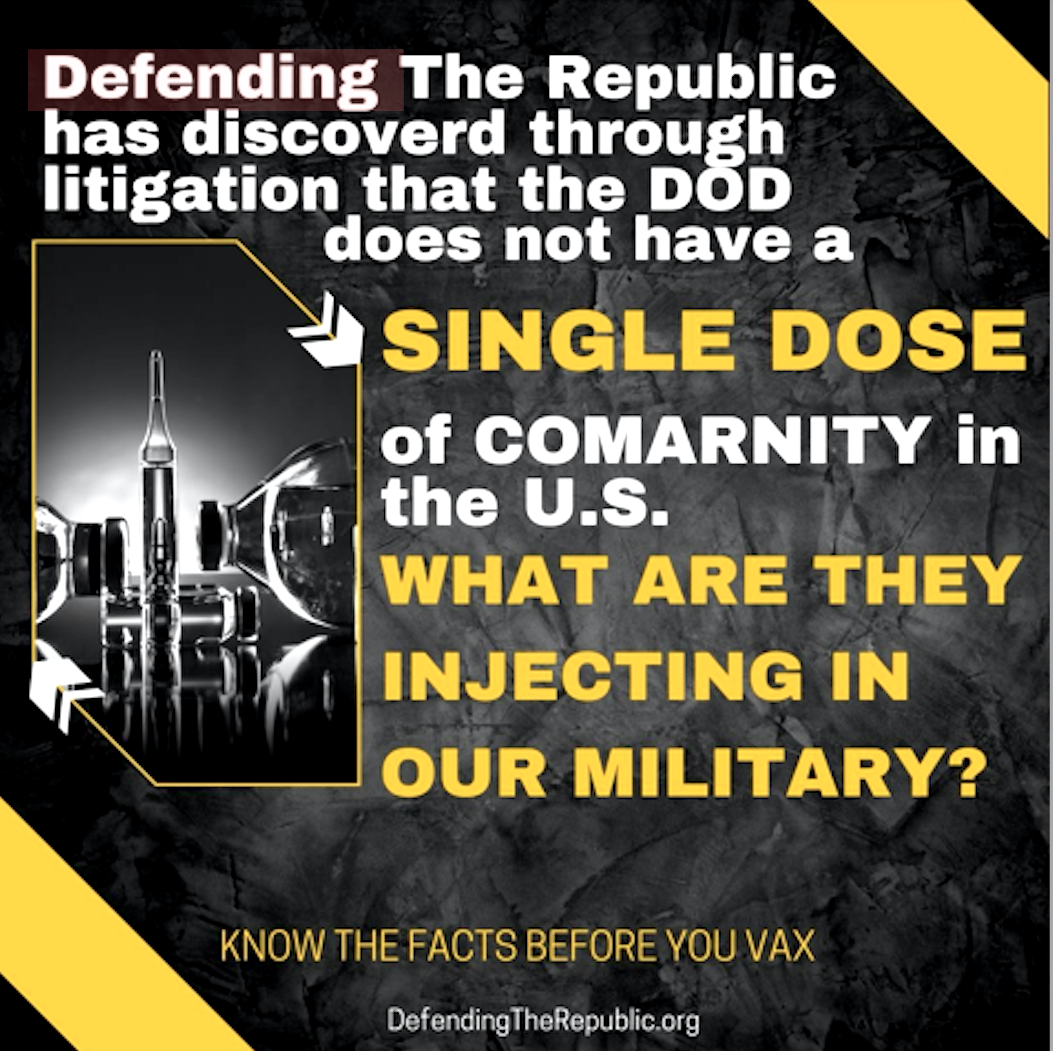 2- Are we, at last, reaching “Herd Intelligence” ?

Now 68% of Americans say the economy is their biggest concern

• A newly released poll shows 68% of Americans’ top concerns going into the 2022 midterms are driven by economic woes
• Only 37% of respondents think the coronavirus pandemic is a priority compared to 53% who felt that way in the poll taken last year
• Despite massive COVID case spikes in December, Americans still felt the priority for government in 2022 should be on the economy

Concerns over the economy are overshadowing the pandemic as a whopping 68 per cent of Americans name financial and economic worries as a main issue heading into the midterm elections.

3- There is a lot of information at the link about the vaccine. Follow the science and you will see how we have been lied to for two years.

QUOTE: This study is yet another independent analysis that is difficult to refute: we have been misled by the CDC, FDA, and NIH.

The next time you see you county health officer, President Biden, or Boris Johnson why not ask them if they can find a mistake in this study by Kyle A. Beattie entitled Worldwide Bayesian Causal Impact Analysis of Vaccine Administration on Deaths and Cases Associated with COVID-19: A BigData Analysis of 145 Countries.

The study found that the COVID vaccines cause more COVID cases per million (+38% in US) and more deaths per million associated with COVID (+31% in US).

In other words, we were lied to.

The vaccines are making this worse, not better. This is why we are not getting ourselves out of the hole.

This is hardly the first study to reach those conclusions. These studies, all done independently, found the same thing—the more you vaccinate, the worse things get.

4- We have talked many times about the lack of treatment for the virus. It is a subject that is gaining more traction. Demand early treatment from your health care provider.

Early Outpatient COVID Treatment – Why is There Still no Plan?

QUOTE:  For most infections, early treatment is imperative to prevent late complications. Gangrene infection in the toe must be treated aggressively to prevent losing not only the toe, but also a foot or leg if the infection is inadequately treated and spreads.

Those with cardiovascular disease are treated with statins and blood thinners as outpatients to prevent more serious disease and subsequent hospital care for stroke and heart attack with a much higher probability of disability or death.

COVID has been with us for almost two years and yet there are still not officially and medical establishment endorsed outpatient treatment protocols to keep infected individuals out of hospitals, which is where more serious problems begin, from secondary hospital infections, ventilators, and ultimately death.

What we are doing is the same thing over and over again, expecting different results, when reality says otherwise. What’s that the definition of?

As America approaches 1 million COVID deaths, we should by now be throwing the kitchen sink at this virus – vaccines, monoclonal antibodies, antivirals, and the cheap off-label zinc ionophores and supplements, that each play a role in keeping Americans from getting sick and dying. It should not be an either/or option but a thoughtful use of everything available. Patients kept out of the hospital live, many of those entering the hospital are damaged or die.

Yet here we are, almost two years into this pandemic, with a dozen claims by President Biden to “shut down the virus” only to set new daily case records last week, with a gaping hole in this important phase of COVID management. How will history judge this omission?

5- Do not comply. We have been such good citizens through all of this, but the time has passed to comply with more mandates and edicts from so called “experts”.

QUOTE: Latane Campell is a pilot for a major airline. In this video he shares his perspective on the vaccine, mandates, masking, and how this is going to end. He points out that 80% of his fellow pilots will refuse to take the booster. They are fed up with the ridiculous mandates from the CDC. In the cockpit, they remove their masks because 1) they need to maximize their oxygen and 2) because they need to talk to each other and to the ground. Virtually all pilots realize that masks are just political theater.

6- This inexpensive drug is effective at ALL stages of Covid-CCP. Read and know about this research. It may save the life of someone you love, IF you can get a doctor to use it. Advocate for your health!

QUOTE: When it comes to the treatment of COVID-19, many Western nations have been hobbled by the politicization of medicine. Throughout 2020, media and many public health experts warned against the use of hydroxychloroquine (HCQ), despite the fact that many practicing doctors were praising its ability to save patients. Most have been silenced through online censorship. Some even lost their jobs for the “sin” of publicly sharing their successes with the drug.

Another decades-old antiparasitic drug that may be even more useful than HCQ is ivermectin. Like HCQ, ivermectin is on the World Health Organization’s list of essential drugs, but its benefits are also being ignored by public health officials and buried by mainstream media.

Ivermectin Useful in All Stages of COVID

What makes ivermectin particularly useful in COVID-19 is the fact that it works both in the initial viral phase of the illness, when antivirals are required, as well as the inflammatory stage, when the viral load drops off and anti-inflammatories become necessary.

According to Dr. Surya Kant, a medical doctor in India who has written a white paper on ivermectin, the drug reduces replication of the SARS-CoV-2 virus by several thousand times. Kant’s paper led several Indian provinces to start using ivermectin, both as a prophylactic and as treatment for COVID-19 in the summer of 2020.

7- These two Tweets are an example of how the Left has flipped and flopped. We have NO idea what the government is now injecting into the military. There is NO approved vaccine in the United States.

8- What in the world is the CEO of Pfizer telling us ?

If you are a vaccine company executive, it’s time to slam the brakes

Here’s what Albert Bourla, Pfizer’s chief executive officer, said on Monday in an interview on CNBC:

The hope is that we will achieve something that will have way, way better protection, particularly against infections because the protection against the hospitalizations and the severe disease, it is, it is reasonable right now, with the current vaccines as long as you are having let’s say the third dose.

Read those words very carefully.Protection against “severe disease” is “reasonable right now” for people who have taken a “third dose” of Pfizer’s vaccine.

Put aside the fact that even those words are at best an optimistic interpretation of current data.

Put aside the fact that Pfizer has NEVER compared a three-dose vaccine regimen to a placebo in a clinical trial.

Put aside the fact that “reasonable right now” suggests that any effect of a third dose will not last.

What the chief executive of Pfizer is telling you is THAT IF YOU RECEIVED TWO DOSES OF HIS COMPANY’S VACCINE LAST YEAR, YOUR PROTECTION IS GONE.

Even against “the hospitalizations and the severe disease.”