We point this out because the Fake News will never admit their policy ideas end in disaster for regular Americans trying to be productive and raise healthy families.

Pay attention to the ramifications of any and all Democrat policy. It is a teachable moment.

1- Quietly, Amazon took employees out of one of their Seattle offices so their workers did not have to spend time in a crime zone. Anti-police policies have produced unsafe cities all across America. There is almost no control of crime in Seattle due to the woke agenda of trashing and defunding the police.

Amazon moves workers from a Seattle office in crime-hit area

QUOTE: Amazon.com is temporarily removing workers from a downtown Seattle office so employees don’t have to travel to an area that’s seen a spate of shootings, carjackings and other violent crimes.

“Given recent incidents near Third and Pine, we’re providing employees currently at that location with alternative office space elsewhere,” an Amazon spokesman said in an emailed statement. “We are hopeful that conditions will improve and that we will be able to bring employees back to this location when it is safe to do so.”

The office at 300 Pine St. in the old Macy’s building is about three blocks from Pike Place Market, a popular Seattle tourist destination. Since Feb. 21, there have been at least three shootings, two stabbings and one carjacking in the area, according to information from the Seattle Police Department’s Twitter account.

About 1,800 Amazon employees are assigned to the office, which occupies several floors above an old Macy’s department store, but many of them had been working remotely due to the pandemic, according to the company. The office is about a half-mile from its main headquarters on Seventh Avenue

2- Here is a graphic illustration of the success and failure of economic policy. Economically, red state policies have led their states to recover employment from the Covid-CCP shutdowns and mandates. Pictured here are January 2022 state employment numbers as a percentage of its pre-pandemic employment rolls 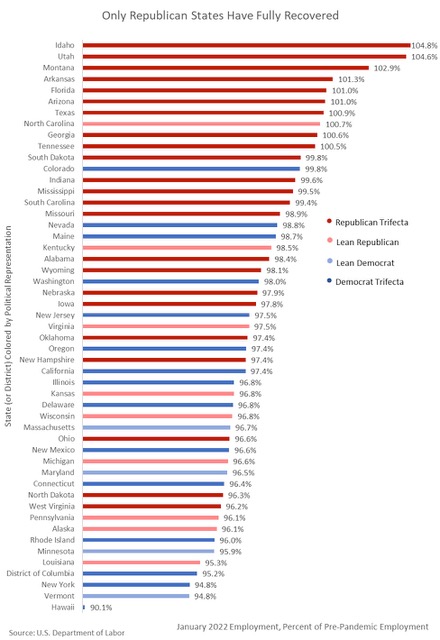 3- Governor DeSantis is working toward solving the problem of election fraud in his state with various policies.

QUOTE: Florida lawmakers on Wednesday passed a new GOP-backed bill that would create the first-ever elections police force, dedicated to election fraud and related crimes. The bill would create an Office of Election Crimes and Security made up of a 25-member staff – including 10 law enforcement officers – to investigate allegations of election-related crimes.

It would also make it a felony – rather than a misdemeanor – to collect and deliver more than two mail-in ballots and raise the fine that can be given to third-party voter registration organizations that evade state election law from $1,000 to $50,000.

4- In Virginia, the left is having a hard time beating back the common sense policies of Governor Youngkin, so they are once again making up lies.
WJLA

‘This letter is a gross misrepresentation of what superintendents believe’: Gov. Youngkin

QUOTE: Over the weekend, it was widely reported that all 133 Virginia public school superintendents sent a letter to Gov. Glenn Youngkin’s administration disapproving of the Governor’s education agenda.

It was also reported that all of the commonwealth’s superintendents asked the Republican Governor to eliminate a “tip line” parents can send their concerns to about teachers and school curriculum.

7News is now learning the state’s 133 superintendents were not advised of the letter before it was sent to the Governor’s administration.

“This letter is a gross misrepresentation of what superintendents believe, I believe,” Gov. Glenn Youngkin told 7News on Monday during a visit to McLean. “It’s my understanding that in fact there was not a vote, this was a board of an association that wrote a letter and mischaracterized the support they had for that letter. I think that’s wrong. This is what these associations are trying to do: which is again put bureaucracy, put politicians, in between parents and their children.

This is why Virginians elected me in the fall. This is why we went to work on day one and on day one we reaffirmed the rights of parents to make these decisions.
I believe this letter does not represent 133 superintendents, and I’ll say just last week I was at the state championships for high school basketball class six all the way down to class one in Richmond men and women teams. It was so much fun. And I had superintendents, principals, teachers, parents, students, coming up to us in droves thanking us for the work we are doing on behalf of students and behalf of parents.”

5- Why does anyone even tolerate having our great American cities ruined by leftist policies?
PJ Media

Blue Cities Are Literal Toilets, and Libs Are OK With That

QUOTE: What is it with big, blue cities and their willingness to accept human waste on the streets? How and why is this tolerated? I grew up in Detroit in the 1970s. Things weren’t great but we didn’t have “Motor City cob-goblins” all over the sidewalks. I suspect if someone attempted such a launch, a neighborhood man or two would have pummelled the pig. These days, human waste is actually accepted as a part of life by liberals, no matter that kids might well wander into it.

TR International, a worldwide chemical company once based in Seattle, left town in part because they were embarrassed by business associates having to side-step homeless waste.

Infectious disease expert Dr. Lee Riley conducted a study and determined San Francisco is as filthy as any third-world slum.

The contamination is much greater than communities in Brazil or Kenya or India. Riley notes that in those countries, slum dwellings are often long-term homes for families and so there is an attempt to make the surroundings more livable. Homeless communities in San Francisco, however, are often kicked out from one part of town and forced to relocate to another. The result is extreme contamination.

It’s hard to find compassion for people who continue to vote for pinko politicians and their self-destructive “woke” policies. Leftists continue to support their apparatchik leaders even as their kids march to school through piles of Newsom’s mud-puppies. But hey, at least they aren’t voting for one of those bigoty conservatives who might literally clean up their streets.