Join us in Florida

If you live or are visiting in Florida now, we would love to see you at The Renewal this Saturday.
January 8, 2022 will mark the historic faith-based heritage event called THE RENEWAL: Restoring America’s Founding Covenant, with leaders gathered from across the country at the Strawberry Festival Amphitheater in Plant City, Florida.

This is not a political event.

We cannot solve spiritual problems by natural means such as military might, elected officials or even human governments. The Renewal is a spiritual solution to the current state of affairs in our land.

Check out this amazing list of speakers!
Sidney invites you to The Renewal 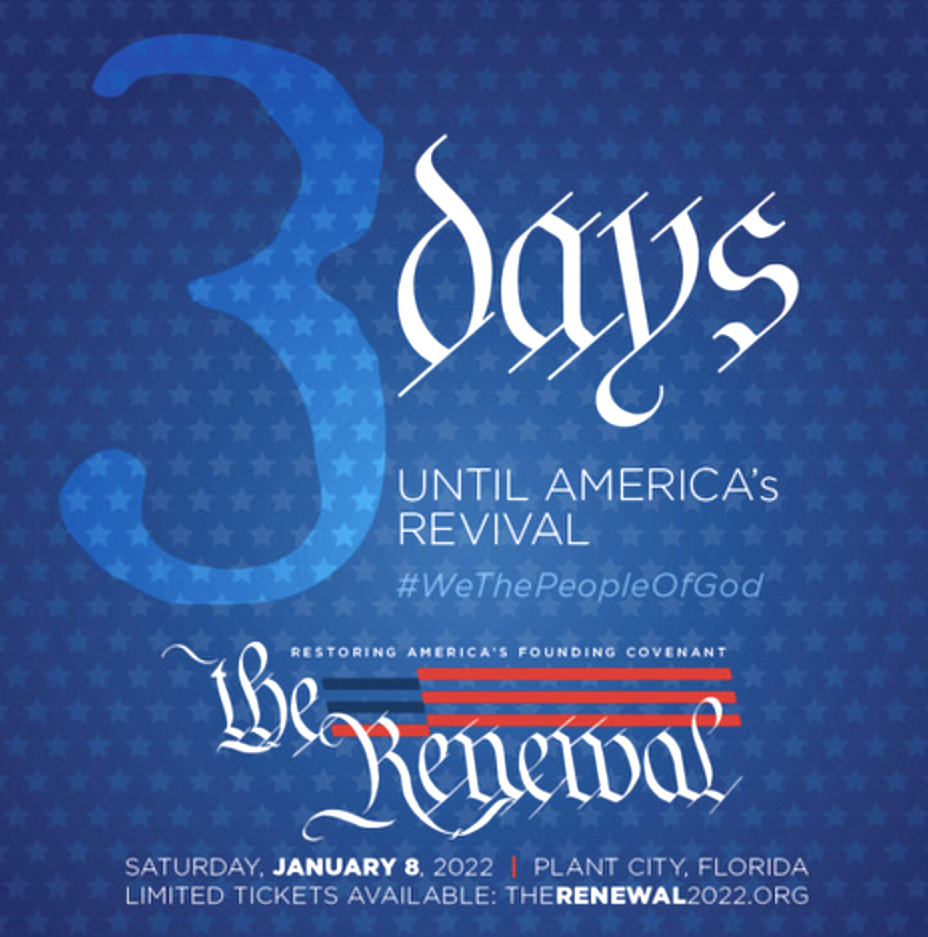 For more background on The Renewal …
read this article in The Christian Post.

###
1- It may seem that nothing is happening on the integrity front but, quietly, there is still work being done.

QUOTE: Georgia authorities have launched an investigation into an allegation of systematic ballot harvesting during the state’s 2020 general election and subsequent U.S. Senate runoff and may soon issue subpoenas to secure evidence, Georgia Secretary of State Brad Raffensperger confirmed to Just the News.

Georgia law strictly prohibits third-party activists from picking up and delivering ballots on behalf of voters, a tactic called “harvesting” that liberal organizers have tried to get legalized in many battleground states without success. The U.S. Supreme Court this summer rejected Democrat efforts to overturn an Arizona law that outlawed harvesting in the battleground state.

Raffensperger, who is seeking reelection in 2022, led a successful effort in 2019 to strengthen Georgia’s prohibition against harvesting ahead of the 2020 presidential election, and defeated an effort by prominent Democrat lawyer Marc Elias to overturn the harvesting ban. Raffensperger also reviewed and rejected claims by former President Donald Trump of widespread fraud during the 2020 election in a series of contacts under investigation by a local district attorney in Atlanta and the Jan. 6 select committee in Congress.

Raffensperger confirmed in an interview aired Tuesday on the John Solomon Reports podcast that his office has deemed the allegations credible enough to open an investigation and possibly seek subpoenas from the State Election Board to secure evidence.

“We do have some information,” Raffensperger said. “And we are going to investigate that. We did deploy drop boxes that were under 24/7 surveillance, and because they were then that really, you know, can indicate who dropped that information off, and we’re really just going through that.”

2- We all want to stop supporting China but it is tough to do so when Amazon makes things so convenient and cheap!
Here are a few tips to help you be more sensitive to buying products made in China and some ways to work around and find American products.

Break Your Chinese Shopping Habit for 2022: Here’s How

QUOTE:  China is the United States’ greatest existential threat and geopolitical enemy. They steal our intellectual property. They hack us and spy on us. They trade and form military alliances with our enemies. They colonize, buy, and assimilate territory all over the world at a frightening rate. And they’ve infiltrated the U.S. to a shocking degree already, evidenced by our increasingly authoritarian government-global corporation complex.

No, you don’t have to give up Amazon or Walmart.

It’s almost impossible to beat the convenience of online shopping at Amazon, Walmart, and the like. Luckily, there’s a simple way to filter your search results for items produced by American workers in American companies. When you type what you’re looking for into the search field, first add the phrase “made in USA,” then type the rest.

There are also websites from which you can buy directly, and which sell only American-made products, but their selection tends to be more limited. The Grommet is a good example: on this site, you can shop through a department or just type specifically what you’re looking for into the search window. While such sites may or may not carry what you’re looking for, if they do have it, you can complete your purchase right there with a couple clicks — and feel righteous about spending money while you’re at it!

QUOTE: The US, the UK and other major economies could be on the brink of over-vaccinating people in the fight against Covid, experts say.

Israeli officials have already announced their intentions to embark on dishing out another round of booster jabs, meaning both the US and UK will eventually face pressure to follow suit even though both nations have insisted there are no plans to administer fourth doses yet.

But scientists argue that rolling out vaccines every three-to-four months simply isn’t ‘doable’ and may not even be necessary because of Omicron, which some believe will speed up the process of endemicity and consign days of sky-high hospitalization and death figures to history.

And they called for more data on dosing gaps between boosters before pressing ahead with plans to administer fourth jabs. Some experts claim the benefits of extra jabs are minimal because their primary purpose – preventing deaths and hospitalizations – has barely waned after a year and several Covid variants, effectively meaning boosters are adding to an already high base level immunity.

I was wrong about COVID-19

QUOTE: For the first few months of the pandemic, I was wrong on just about everything regarding the COVID-19 pandemic. I supported the initial two-week lockdown that turned into six months of forced isolation. I encouraged people to wear cloth masks that don’t work. I argued that the threat posed by the pandemic required collective sacrifice. I even defended Dr. Anthony Fauci.

These positions were the biggest failures of my career so far.

Even though we knew very little about COVID-19, I knew enough about the government and its desire for control to have understood that “14 days to stop the spread” would turn into an extensive battle for normalcy. I should have known that forcing people to change their behavior in service of a collective cause would lead many to develop a sort of religious zeal for that cause. Most regrettably, I should have seen through the hubris of our public health officials, many of whom I naively trusted, and recognized the political self-interest at the core of so many of their policies

5- Sometimes all the words in the world do not convey the story as well as a good cartoon! 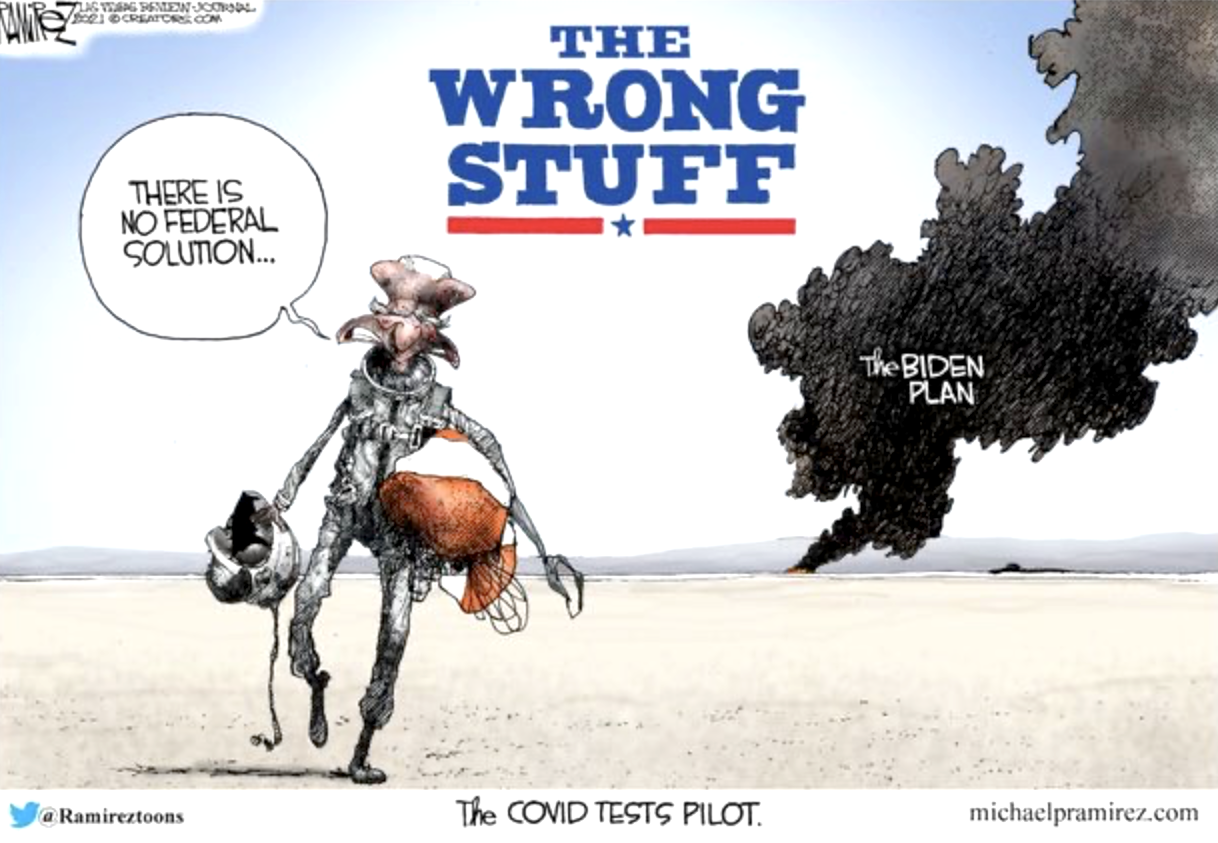