Good News Friday – WE FIGHT ON! THE TRUTH WILL COME OUT!

You may have heard that Governor Whitmer of Michigan, and her Attorney General, and the City of Detroit have litigated to punish Sidney and Team Kraken for having the audacity even to file a lawsuit raising allegations of fraud in Michigan.
Federal judge Linda Parker wrote 110 pages of opinion to that effect, and the City of Detroit and the state officials are now seeking attorneys fees in excess of $200,000 for their efforts to punish the entire legal team–regardless of his or her individual role in the case, the First Amendment rights of free speech and to petition for grievances, and all extant precedent.
The Michigan judge, state officials and city all seek to have Sidney and all counsel disbarred.  Sidney is licensed in Texas, and the Michigan plaintiffs have even publicized the date of the hearing and used it to raise funds for their political campaigns.
DO NOT DESPAIR.  Sidney has no fear.  All we want is the Truth.  If they have nothing to hide, why are they hiding everything, suppressing everything, and attacking us personally and professionally?  We are obviously OVER THE TARGET.   Their attacks confirm the validity of our allegations.  The math is irrefutable.
Here’s a graph of the painfully obvious fraud in Michigan that they want everyone to ignore. 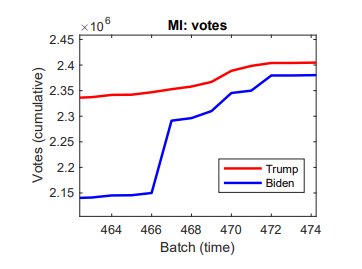 We know we are right about the facts and the law.  We will appeal.

Words from Sidney:
“The fees sought against us by the City of Detroit were completely self-inflicted. The City was not a party in the case but intervened to create litigation–to attack and punish us. The state is attacking us to deflect from the corruption in the Governor’s office and Secretary of State.  We will indeed appeal. The judge’s opinion is riddled with errors of fact and law.
There was massive fraud in Michigan, and we were never allowed to put on the first witness to prove it.  We are only getting started.  The truth will come out.  It must.  The American people were cheated of their duly elected President.”
Please help any way you can–through prayers or contributions.
The dark side seems to have unlimited funding.
###

In August, Cornell University denied a student’s medical exemption to the COVID-19 vaccine.

Defending the Republic fought back, teaming up with America’s Frontline Doctors to assert the student’s right to take control over his own healthcare decisions, protect his health, and refuse the vaccine. Our efforts were successful and Cornell – a liberal university based in New York – reversed its prior decision and allowed the medical exemption.

The student’s mother had this to say:
“My son was originally denied a medical exemption to the COVID-19 vaccine by Cornell University. Thanks to the hard work of Defending the Republic, Jamie Scher from America’s Frontline Doctors, and my son’s medical providers, Cornell reversed its denial and granted my son his medical exemption. We encourage all students and their parents to stand up for their rights and assert their medical and religious exemptions if necessary. You can win this fight.”

We will continue to fight vaccine mandates and the denial of medical or religious exemptions – but we need your support.

“Joe Biden told Americans when he was elected that he would not impose vaccine mandates. He lied,” McDaniel said. “Now small businesses, workers, and families across the country will pay the price.”

2- Support these governors who are taking on the full force of the government to protect your freedom. They will come under whethering attacks and will need you to help them stay strong and do the right thing.

‘We Will Fight Them to the Gates of Hell’: Republican Governors Declare War on Biden’s Vaccine Mandates

Amid rising Covid-19 numbers across the U.S. and falling approval ratings on his handling of the pandemic, President Biden announced draconian new vaccine mandates on Thursday, targeting tens of millions of Americans.

3- Just so everyone is clear, this new Biden mandate has nothing to do with caring about your health or the health of the nation. In fact, the current outbreak is on a downward trend. (See the chart at the link below) These rules by Biden are coverups for massive power grabs and must be fought by us all.  The federal government does not belong in our businesses or personal health care choices.

(Issues and Insights)
Biden’s Vaccine Mandate Has Nothing To Do With Fighting COVID
QUOTE: As soon as President Joe Biden announced his plan for a widespread vaccine mandate to fight COVID-19, protests erupted. And rightly so. But the real reason Biden chose now to announce it is so he could claim credit for what is already happening with COVID.

In what is almost certainly a vast overreach of his executive authority, Biden declared that he’d develop “an emergency rule to require all employers with 100 or more employees, that together employ over 80 million workers, to ensure their workforces are fully vaccinated or show a negative test at least once a week.”Of course, this mandate will raise constitutional challenges. Which is no doubt what Biden wants.

###
There is a lot going on right now on many fronts. We thank you, our dear Patriots, for holding fast with us through these turbulent times. And we continue to ask you for your support, your donations and most of all your prayers as we continue this fight to save our country.

Thank You and Hold Fast,