As we enter into the last weekend before the election, we know everyone is anxious. Yes, there is a strong chance the Democrats will again cheat.

Much work by many people HAS BEEN DONE on local and state levels putting in place multiple ways to stop their cheating.

But it all comes down to overwhelming the system with legal votes on Election Day.  It is the best way, at this point, to foil the Democrats, who can only win when they can manipulate vote tabulations.
Before we get to the GOOD NEWS, here is a housekeeping note.
Housekeeping: There are several email providers who have purposely marked links related to Defending the Republic’s website as “unsafe”. This is Big Tech suppression and censorship.
A way around this is to go to DefendingtheRepublic.org through your browser (Safari, Chrome, etc) where you can access DTR content outside of the email restrictions. Again NOT via email but via your Internet browser search bar.
When we asked for contributions and support in the Wednesday newsletter, many of you have reported that you were unable to do that due to repression thru your email provider.
You can cut and paste these links into your browser search bar and it will take you, “safely” to DTR.
Website: https://defendingtherepublic.org
Donate: https://defendingtherepublic.org/donate-sub/
Shop for holidays: https://defendingtherepublic.org/shop/
Thank you again for all of your support and for letting us know of this problem.

1- It is tedious, however, Republicans keep winning voter integrity fights in the courts.

QUOTE: A Wisconsin judge on Wednesday granted the Republican National Committee’s request for a temporary injunction ordering the county clerk to stop violating state laws that permit the public’s right to observe the election and voting process, including during in-person absentee voting,the RNC announced.

Early voting in Wisconsin started on October 25, according to the Milwaukee Journal Sentinel.

The judge approved the RNC’s request just hours after it was filed, with RNC Chairwoman Ronna McDaniel stating that “in less than 24 hours, the RNC successfully sued and won in Green Bay to ensure the city’s Democrat election officials follow the law on the books in Wisconsin.” She added that “bipartisan poll watching is a constitutional right in Wisconsin, and now the Green Bay clerk will have to let them in the room to observe. We are grateful the court granted a swift and decisive victory for Wisconsinites, and the RNC will continue to fight for election transparency across the country.”

Green Bay had been unlawfully restricting Republican Party observers, keeping them outside of the room where in-person absentee voting took place.

2- In deep blue states, Republicans have a chance to win 12 more seats. This only happens if everyone votes on Tuesday.

QUOTE: Analysts at the non-partisan Cook Political Report moved the rating for ten congressional districts in favor of the Republican candidates with only a week left before the midterm race.

Cook Political explained that many of the congressional districts President Joe Biden won comfortably during the last presidential election are at risk of being lost because Democrat governors are underperforming. In comparison, Republicans are surging as they focus on high crime and skyrocketing inflation. The report explained that the safest Democrats are in states that do not have competitive statewide races

3- This is the ripple effect from winning massive Republicans seats up and down the ballots.

It Isn’t Just Congress: A ‘Red Wave’ Is Hitting Social Media, Too

QUOTE: With the 2022 midterm elections less than a week away, it’s easy to be obsessed with the outcome of the vote. If recent polls are correct, this will be a “red wave” election in which Congress is returned to GOP control. But there’s another “red wave”: The one that’s washing over the Big Media and Social Media.

What looks now to be a likely “red wave” election may turn into a “red wave” of change for social media as well.

From Hunter Biden’s laptop, which contains clear evidence of the Biden family’s corrupt profiteering from China, Russia, and Ukraine, to the 2016 election shenanigans, which show that Hillary Clinton and the FBI conspired against Donald Trump by concocting false charges based on phony evidence that he “colluded” with the Russians to win the presidency, the left-leaning social media have helped shut down what should have been healthy reporting and debate.

A shocking number of major newsworthy developments — the origins of the COVID-19 virus, Biden’s age-related mental fumblings, and the total disaster of our current economy’s inflation and energy crisis — continue to be tamped down as far-left social media outlets pursue their radical agendas.

Americans are fed up with de facto censorship, crime, and woke culture. It’s why Black and Hispanic Americans are thinking of voting against the Donkey Party for the first time ever. And why liberal subarbanites, angry at local schools’ failures and “defund the police”, are doing the same.

4- We have many years of battles to change higher education from propaganda factories to their founding purpose of true education. This decision might be a start.

QUOTE: The court’s conservative majority could prohibit consideration of race in admissions, a policy that colleges and universities say is essential to ensure diversity on campus.

Conservative Supreme Court justices indicated Monday that they are willing to end the explicit consideration of race in college admissions as they weighed cases challenging affirmative action policies at the University of North Carolina and Harvard University.

5- It is oft said that “A conservative is a liberal mugged by reality.”

When you read this fascinating piece about Los Angeles potentially electing as mayor a white, male, rich, quasi-Republican developer, that quote might pop into you mind. Hollywood has been mugged. Join the club.

QUOTE: L.A.’s mayoral race pits a black congresswoman endorsed by Obama against a billionaire developer. “I can’t tell you the number of people who tell me, ‘I’m voting for him, but I’m not telling anyone.”

“This is like a breaking point,” said Nicole Avant, who served as U.S. ambassador to the Bahamas under Barack Obama and is the wife of Netflix co-CEO Ted Sarandos. We were talking about Los Angeles, where she was born and grew up and met her husband. “Who is in charge here? How is this happening? It’s the drug addicts in front of people’s houses, it’s people naked in the street—there’s so much chaos, and Rick is the opposite of that, and we just need to reel things in and do things in a different way.” She was referring to Rick Caruso, the billionaire real-estate developer running for mayor of the second-biggest city in the country.

Avant is black Hollywood royalty. Her father, Clarence Avant, now 91, was a legend in the music industry, managing the likes of Sarah Vaughan, Freddie Hubbard and Bill Withers. They called him the Black Godfather.

So you might think that Avant would be supporting Karen Bass’s bid to be mayor of Los Angeles. Bass, who is black, is a six-term Democratic congresswoman. In 2020, she was on Joe Biden’s vice-presidential shortlist. Days ago, Obama, Avant’s old boss, endorsed her.

But Avant is backing Bass’s rival, Caruso—who was a Republican for years, and then, in 2011, switched his registration to “decline to state,” and then, in January of this year, switched to Democrat, just in time to run for mayor in a city overflowing with Democrats.

6- We are of the opinion that there is no way to forgive and forget the actions by Fauci and many others. If you live in Missouri, vote for Eric Schmitt for US Senate so that this case can move into that realm of investigation. This is another reason to vote out all Democrat Attorneys General in all states.

QUOTE: The Gateway Pundit previously reported in May that Missouri Attorney General Eric Schmitt, along with Louisiana Attorney General Jeff Landry, filed a lawsuit (Missouri v. Biden) against the Biden Administration, including Biden himself, Anthony Fauci, the Department of Homeland Security and nearly a dozen federal agencies and Secretaries.

The suit alleges a massive coordinated effort by the Deep State (permanent administrative state) to work with Big Tech to censor and manipulate Americans – from average citizens to news outlets – on issues including the Hunter Biden Laptop from Hell, 2020 Election Integrity, COVID-19 origin and extent skepticism, COVID-19 vaccine skepticism, among other issues.

The case reached a CRUCIAL turning point in July, when AG Schmitt and his team won a huge victory.

They persuaded the federal judge to grant them limited discovery (investigatory powers) BEFORE the Court.

On Wednesday we learned that Dr. Anthony Fauci will be deposed on November 23rd in the case.

7- If you happen to see that weird, desperate, divisive lecture from the weak, confused person occupying the White House, you may have noted his theme was that Republicans are violent. Of course, this is a baldfaced lie. Here are a few topics he could not talk about as he has FAILED on all them. THIS is why voting is vital. Pass it on… 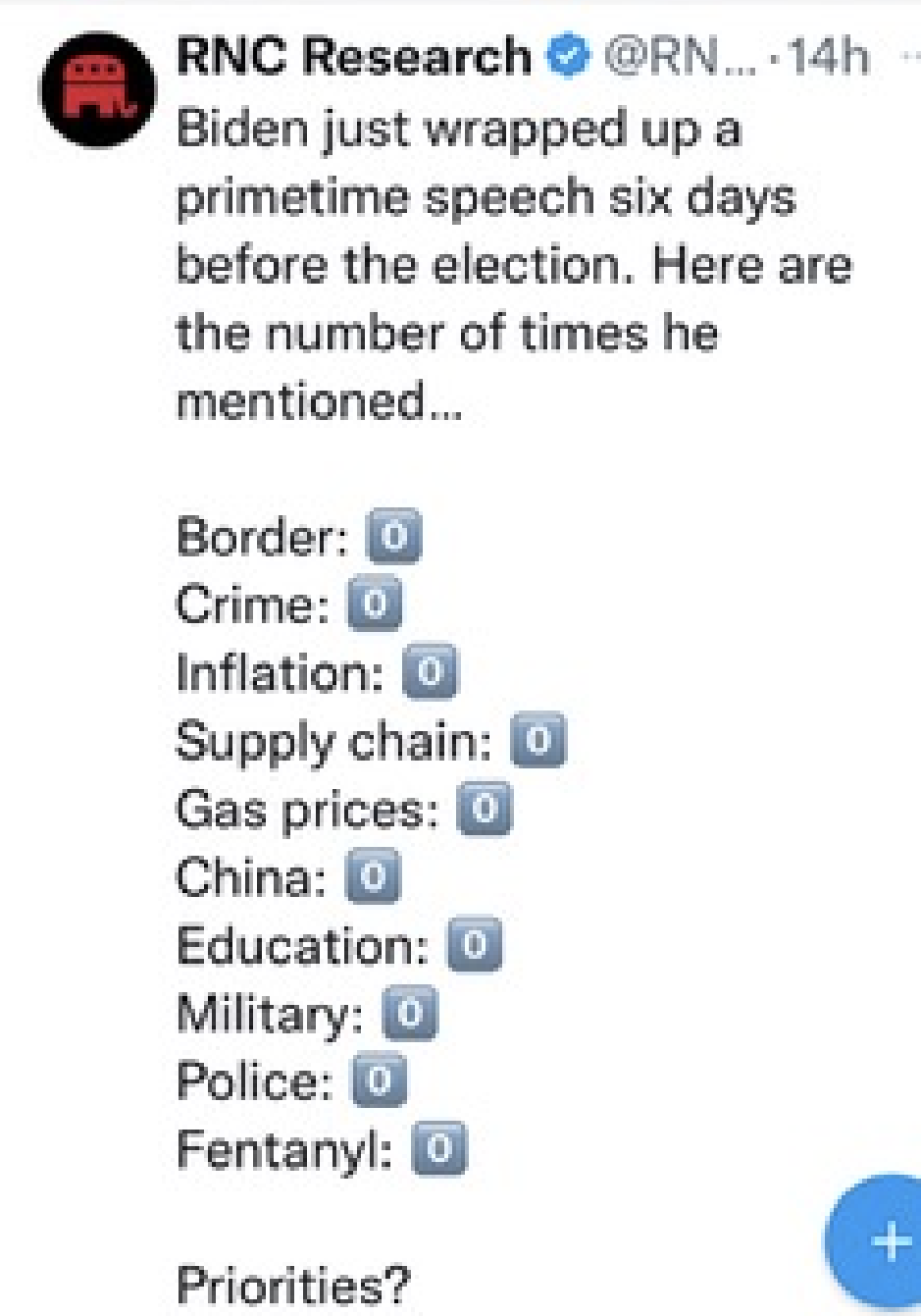 Over the weekend, pray for Republican candidates as they campaign for a few more day. The opposition will be strong against them.
Pray for undecided voters that they may be moved to help restore our republic.
Pray for the thousands who have stepped up to be poll watchers, election officials, precinct chairmen and campaign helpers.
Pray for the people of Brazil as they fight for freedom.
READ. KNOW. SHARE. PRAY. VOTE ON ELECTION DAY.

Support Defending The Republic with this beautiful Crystal Christmas Tree Ornament. A thoughtful gift for a Republic loving friend. 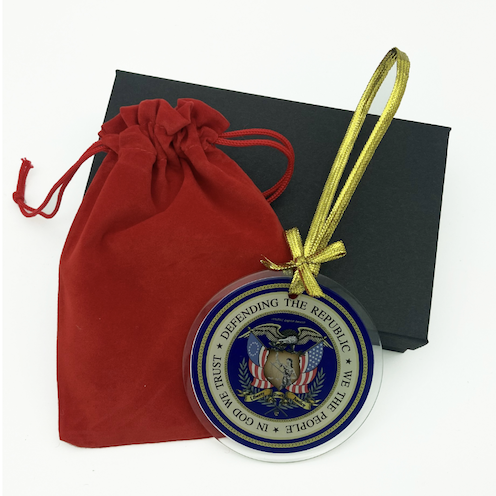