We will not let them STEAL our joy too.
The left is trying very hard to diminish our happiness from the Midterm results by holding off announcing the winners in Arizona and Nevada.
They are trying to stop our momentum. We will not let them!!
Here is some good news to take into your weekend after an exhausting political week.

1- The conservative, American First agenda is a growing coalition.

QUOTE: The populist GOP’s share of the Latino vote jumped by a third to almost 40 percent, compared to 2018, according to the exit polls.

Eleven percent of the electorate are Latinos, so this 2018 to 2022 shift is a gain of 1 percent nationally. That 1 percent shift is more than enough to decide many close races.

The GOP share of the black vote also jumped sharply from 2018 — but from the very low level of 9 percent up to just 13 percent.

The vote gain is likely enabled by the GOP’s populist stance since Donald Trump pushed aside the establishment wing of the GOP in the 2016 presidential primaries.

The GOP’s strongest showing among Latinos was among married men and women, where 66 percent and 50 percent voted for the GOP.

The black vote has long been a lock for the Democratic Party, despite federal economic policies that disadvantage, sideline, and subordinate American blacks.

2- The left has been trying to turn Texas BLUE for a decade. So far, all of their efforts have failed. They won’t stop trying.
The Texas Tribune

Voters returned GOP incumbents to their jobs at the top of the ticket and handed the state’s dominant party its 14th consecutive sweep of statewide offices. Republicans also seemed poised to add slightly to their majorities in the Texas Legislature, where they’ve controlled both chambers for 20 years, and held large leads in all statewide judicial races.

“Tonight Texans sent a message that they want to keep the Lone Star State the beacon of opportunity that we provided over the past eight years,” Abbott wrote on Twitter on Tuesday evening.

The GOP’s success in Texas, even as it fell short of expectations nationally, signaled voters’ endorsement of Abbott following a second term marked by aggressive actions on the border and immigration, conservative positions on LGBTQ and other social issues and a near-total ban on abortion. And it was another rebuke of Democratic gubernatorial nominee Beto O’Rourke, who lost his third election in four years.

3- The blueprint for winning politicians is right here.

‘Never surrender to the woke mob’

QUOTE: After last night’s shocking loss in the counting of votes, conservatives need a little hope. We got a ton of it from Florida Governor Ron DeSantis.

He took on LGBT, transgender-mania and Disney. And that was just in March. He opened his state for business during the pandemic panic and triggered an economic boon. He is a fighter for the people.

Floridians rewarded him on Tuesday with a landslide victory.

DeSantis took a lot of crap for that from the Miami Herald. The steady barrage of attack editorials resulted in Miami-Dade County flipping red for the first time in decades.

DeSantis said, “Florida was a refuge of sanity when the world locked down. We stood as a citadel of freedom for people across this country and indeed across the world. We faced attacks, we took the hits, we weathered the storms, but we stood our ground. We did not back down. We had the conviction to guide us, and we had the courage to lead. We made promises to the people of Florida, and we have delivered on those promises. And so today, after four years, the people have delivered their verdict. Freedom is here to stay.”

4- We are happy to see that Senator Ron Johnson was re-elected in Wisconsin.

QUOTE: Our Constitutional Republic’s greatest defender may continue his work.

All Americans who care about the integrity of the US Constitution and its protection of individual liberties can breathe a sigh of relief that Senator Ron Johnson of Wisconsin won his reelection bid. Throughout the COVID-19 crisis, he was the only Senator to question—and ultimately challenge—the federal government’s catastrophic policy response.

In 2020 he was chairman Senate Homeland Security Committee, and he used his position to hold three hearings (on May 6, November 19, and December 8) about the early treatment of COVID-19 and how it was being suppressed by our federal health agencies, and censored by mainstream media and social media platforms such as YouTube and Twitter.

James Madison, the author of our Constitution, understood the fragility of a true constitutional republic, which could, at any given time, be threatened by the tyranny of ambitious, power-seeking men. Throughout history, tyrants have invoked public emergencies in order to extend their power. This is precisely what we saw happening during the COVID-19 pandemic.

Senator Johnson recognized this and courageously opposed it. Everyone in this country who cares about our constitutionally guaranteed liberties should be grateful for his reelection.

5- Consider this and pass on to your favorite Republican politician. The Dems spent millions on the abortion scare tactics.  But Governors who stepped up and banned abortions in their states won by landslides. 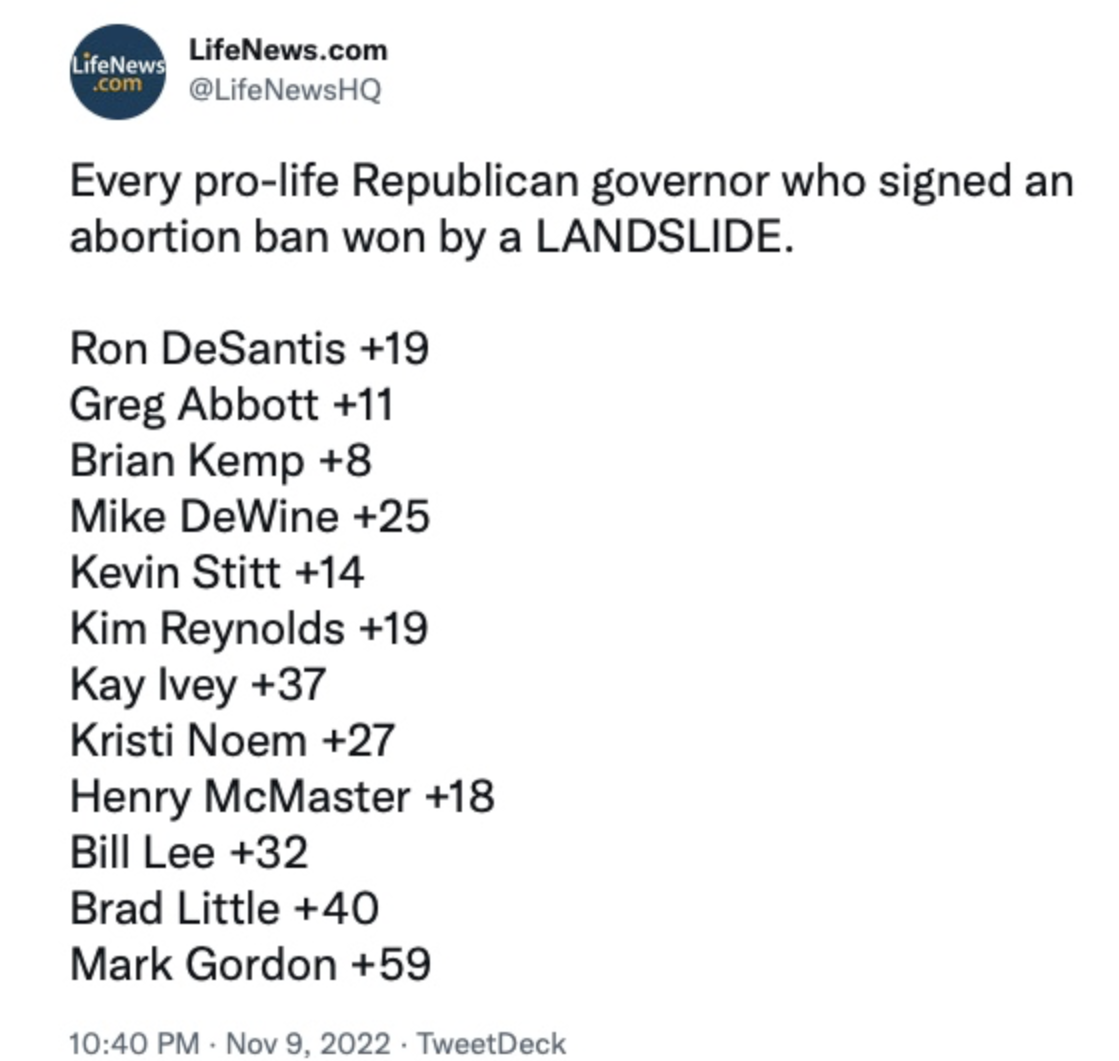 6- There seems to be no lacking of mega-maniacal mega-donors for the Democrats. It is a good thing that at least one of them is poorer.

QUOTE: Sam Bankman-Fried, the CEO of crypto exchange FTX and considered the Democrats’ “newest megadonor” ahead of the 2022 midterm elections, reportedly saw around $6 billion of withdrawals within 72 hours before Tuesday morning, forcing him to sell the company to its biggest rival on Election Day.

According to the Washington, D.C.-based non-profit Open Secrets, Bankman-Fried’s total contributions this cycle amounted to $39,826,856. That included a whopping $36,793,956 given to Democratic candidates, with just $235,200 to Republicans.

Bloomberg reported that Bankman-Fried saw his $16 billion fortune “eviscerated” in days, saying the FTX co-founder was “on the brink of a 94% wealth wipeout” at the hands of rival billionaire Zhao’s Binance.

QUOTE: Facebook parent Meta is laying off 11,000 people, about 13% of its workforce, as it contends with faltering revenue and broader tech industry woes, CEO Mark Zuckerberg said in a letter to employees Wednesday.

8- A big Republican win in New York against a Democrat bigwig.
National Review

Lawler has dealt Democrats an embarrassing loss in an area that President Biden won by 10 points in 2020.

9- This can be ignored by the the Fake News and Republican Elites in D.C. but, the proof is in the pudding! Republican have to fight not only the Democrat machine but the GOP Establishment machine!  Factoring in a lot of cheating and this record is pretty darn impressive.
The Gateway Pundit

BIG DAY for Trump-Endorsed Candidates that Fake News Media Will Not Report – 9 Losses and 174 Wins…. So Far!

QUOTE: According to the fake news, former President Donald Trump did not see the victory he had thought his endorsement would create on election night. But that is not accurate. Trump already has tallied more clear wins than defeats.

Trump-backed candidates have won huge despite the fact that this is one of the most completely rigged elections in American history.

This past Tuesday, President Trump posted on his Truth Social account the results of the midterm elections, boasting that his favored candidates had won 174 seats and lost 9.

“174 wins and 9 losses, A GREAT EVENING, and the Fake News Media, together with their partner in crime, the Democrats, are doing everything possible to play it down. Amazing job by some really fantastic candidates!” Trump wrote.

QUOTE: On the occasion of the 2022 Midterm Elections, the Hawkeye State experienced the full effect of their own tsunami that’s been building over the years. Once a quintessential swing state, Iowa has swung totally red. Governor, both Senators, all four Reps, state AG (close race)—all Republican. It was the final flip of House 3, in a very close race, that did it (call it a 2000 vote margin out of over 300k votes). But it doesn’t stop there. The state senate stands at 32R, 18D. The state house is 60R, 40D. (Further down, you’ll see how that translates into practice.) And as a sort of cherry on top of the tsunami, Amendment 1 – Establish state constitutional right to bear arms – passed 65/35.