We are broken hearted over the terrible shooting this week in Texas. It casts a pall on anything that might be good news this week.

We hope that this event will open up deeper conversations on the mental health of our young adults, who have been horribly treated by many aspects of our society, and who need help.

We pray for comfort and strength for all the loved ones of the victims and all those traumatized by being part of the tragedy.

There has been progress on several other issues in the past week.

1- Sens. Ted Cruz, Ron Johnson, and 12 other Republicans have introduced a bill designed to protect military service members from punishment for declining the Covid-19 vaccine.

The Allowing Military Exemptions, Recognizing Individual Concerns About New Shots (AMERICANS) Act of 2022 is designed to counter the Biden administration’s efforts to coerce and punish Armed Forces personnel who do not want or need the vaccination, which has proven largely ineffective at preventing infection, transmission or illness from Covid. The bill also includes additional accountability measures to increase transparency.

QUOTE: U.S. Senator Ted Cruz (R-Texas) and 13 of his colleagues have introduced the Allowing Military Exemptions, Recognizing Individual Concerns About New Shots (AMERICANS) Act of 2022. The legislation counters the Biden administration’s efforts to coerce and punish service members who decline the COVID-19 vaccine, and introduces accountability measures in response to DOD efforts to undermine transparency.

This bill would require the Secretary of Defense to make every effort to retain unvaccinated service members, strengthen language to ensure service members receive discharge classifications commensurate with their record of service, require the Department of Defense to report the number and type of COVID-19 vaccine religious exemptions that have been denied, and create an exemption from COVID-19 vaccine requirements for service members with natural immunity. The act would also protect service academy students and Reserve Officers’ Training Corps (ROTC) members in the same way.

2- These are brave people going against their own military which has grievously injected, through force, untested, unapproved, and unsuccessful substances into our service members.

QUOTE: Around 520 military service members filed a suit on Monday against the government.  Their primary argument is that the vaccine mandate is illegal because there is no approved vaccine available in the US. This means that approximately 55% ( amount vaccinated since the August 23, 2021 mandate from the Secretary of Defense (SecDef) ) of the military have been vaccinated illegally and under duress.

This case comes after last week’s ruling where a Navy Officer was found innocent of wrongdoing when he didn’t take the COVID vaccine.  The Officer in the case, LT Bill Moseley, claimed he had the duty to not take the vaccine since the one administered by the military was not approved by the FDA.

3- The treatment of the January 6 political prisoners remains a terrible situation. The good news is that we are getting some video footage that proves what a nightmare our government has forced on American citizens.

NOTE: DefendingTheRepublic.org is defending as many of these prisoners as we can and providing defenses for others. Please sign up for a monthly contribution to help us help them. The costs of a real criminal defense are very high. The government continues to hide exculpatory evidence and treat them horribly, as we now see in these leaked videos.

QUOTE: Secret video recordings have been leaked exclusively to The Gateway Pundit from deep within the walls of the DC Gulag. See the series of eight videos below.

This filthy facility is notorious for inhumane and torturous conditions. It is where many Political Prisoners from January 6th are being unconstitutionally detained by the United States Government pre-trail.

No outside witnesses, visitors or journalists are allowed to visit the insides of DC Jail where the J6 Political Prisoners are being held. Even United States Legislators have been turned away by the warden. There is no recording allowed at the jail. Therefore, no footage of this type exists in the world that documents the plight of the American Political Prisoners of The Biden Regime.

Fellows is facing up to twenty years in prison if convicted. There will more than likely be legal ramifications directed towards Fellows when the Regime learns of these videos.

“These J6er’s are second class citizens at DC Jail,” said Tina Ryan of Citizen’s Against Political Persecution. “They don’t have the option to use the jail facilities like the other prisoners do- including the convicted murderers and rapists. Because they are Trump supporters they are being treated worse than men that have been convicted for murder.”

After a year of getting to know many of the January 6th political prisoners, it is worth noting that many of these men remain strong and unbroken. It is a privilege to get to know them and serve as a first hand witness to the strength of mind, willpower and God that keeps them whole.

4- The power of the people still exists!

State Farm Exec Apologizes to Angry Agents, Says ‘We Made a Mistake With Our Involvement’ With GenderCool

QUOTE: State Farm agents across the country fielded angry phone calls on Monday from customers who were either threatening to cancel their policies or who flat-out canceled them after hearing news that the company had partnered with The GenderCool Project to donate books regarding transgenderism and gender fluidity to schools in order to “increase representation of LGBTQ+ books and support our communities in having challenging, empowering, and important conversations with children Age 5+.”

By the close of business Monday, after the CEO reportedly heard from more than 2,000 independent State Farm agents nationwide (and probably a flood of customers), the company announced that it was ending its partnership with The GenderCool Project, as RedState first reported.

5- More on the corporations who used to be involved with groomers.

QUOTE: And then there were 13. When the week began, GenderCool had 23 corporate sponsors who funded the purchase of LGBT-friendly books and materials for kindergarteners and other kids in public schools.

As of this afternoon, there are 13. State Farm was the first. It was outed on Monday. An uproar ensued and forced the SJWs running the company to act like a good neighbor instead of the neighborhood pervert.

WGLT reported, “State Farm has ended its partnership with a nonprofit organization that promotes LGBTQ education for children.”The Bloomington-based insurer dropped its support of Chicago-based GenderCool after receiving backlash.

QUOTE: Florida shattered the record for the state with the highest share of international tourism in 2021, eclipsing the prior mark set by New York back in 2011, officials said Friday.

Roughly 45% of all international visitors to America last year touched down in the Sunshine State, Gov. Ron DeSantis announced at a press conference.

DeSantis said that trampled the previous record of 34% set by New York in 2011.

He attributed Florida’s tourism surge to the absence of restrictive COVID-19 measures that suppressed recreation.

“One of the reasons why we’ve done so well is because people can come here and you can go where you want, do what you want,” he said. “You’re not going to get shaken down for medical papers at a restaurant.”

7- We have a dream…that someday, a conservative is again elected Los Angeles, California.

QUOTE: While most of the U.S. political world is focused on Tuesday’s Pennsylvania Senate primary, let’s shift our attention to the West Coast, where Los Angeles — about as deep-blue a city as you’re going to find in this country — may be close to electing a new mayor who was a Republican until 2012, sits on the board of the Reagan Foundation, and not only opposes “defund the police” but urges the public “to show our support for them with respect and gratitude.” The political ground is shifting beneath our feet, and Rick Caruso’s upstart bid for L.A. mayor is an under-recognized indicator of that shift.

Just how wild will this year’s midterm elections turn out to be? The most right-of-center option in the Los Angeles mayor’s race, billionaire developer Rick Caruso, could well end up winning and is ahead by one percentage point in the most recent poll.

Caruso is on the board of trustees for the Ronald Reagan Presidential Foundation and Institute. In addition to playing a big roll in his own family’s charitable foundation, he has served on various governing boards for the University of Southern California, Pepperdine School of Law, Loyola High School, and St. John’s Hospital. He endowed the USC Caruso Department of Otolaryngology at the Keck School of Medicine, as well as the USC Catholic Center.

8- There is no good news for Obama-controlled Netflix. That is good news for those working against the left’s most prolific propaganda factory.

From Breitbart: Netflix shares fell more than seven percent on Wednesday as the streamer faced more bad news about its subscriber outlook, including a new study showing that long-term Netflix customers are abandoning it in significantly larger numbers.Wednesday’s losses mean Netflix shares are off a staggering 70 percent for the year so far.

President Donald Trump is planning a streaming service to take on Netflix.

We will be taking Memorial Day off to remember and mourn those who served our country and died for our freedoms.

It is more than a three day holiday.  It is a solemn remembrance of the cost of freedom. It is a deeply personal day for those who have lost loved ones while serving.

One way to show your respect and honor the dead is to display your American flag at half-staff until noon, then raise you flag full-staff until sundown. 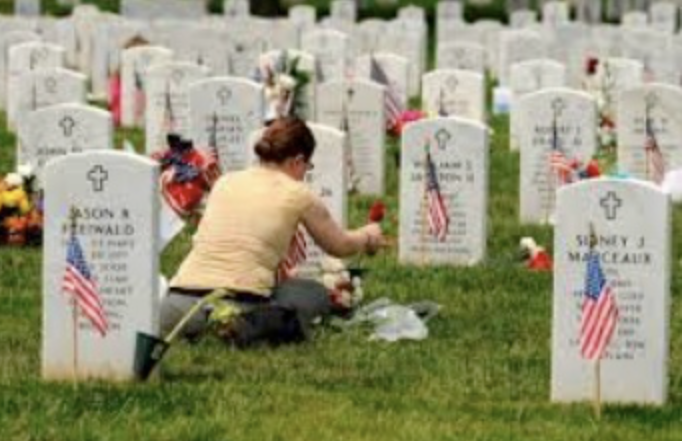