It’s Friday!  That means we have some GOOD NEWS at the end of yet another crazy week!

Take some time to get outside, even though it is hot in a lot of places. The sun is good for your immune system and for your mental outlook.

Sidney Powell on Brannon Howse Live
Catch up on what Sidney is doing and what she thinks about recent developments.  This interview was on Thursday night.
Click HERE to watch. 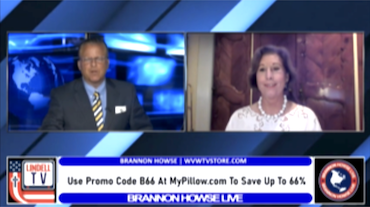 1- This special election win on Tuesday in Texas is part of an overall trend that is good for people who want real representation!

She beat Dan Sanchez, the leading Democrat, outright in the closely watched race and will be the first Mexican-born congresswoman. She will get to serve only until January, but Republicans heralded her win as a shot of momentum in their new South Texas offensive.

With all precincts reporting Tuesday night, Flores had 50.98% of the vote and Sanchez had 43.33%.

“For over 100 years, we have been taken for granted,” she said at her election night party in San Benito. “I will show you what real representation looks like. I will represent all people.”

Sanchez conceded in a statement that pointed the finger at national Democrats for not doing enough to defend the seat. They had argued the race was not worth the investment.

2- This is the education playbook every Governor should be following.

QUOTE: The re-election campaign for Florida Gov. Ron DeSantis is launching an education initiative that provides a blueprint for school board candidates that prioritizes parental rights and the educational needs of students.

Known as the “DeSantis Education Agenda: Putting Students First, Protecting Parents’ Rights,” the program is a statewide agenda for school board candidates and members who are committed to advancing DeSantis’s priorities at the local school board level. In addition to furthering the academic success of Florida students, the push is also aimed at empowering the role of parents in their children’s education, as well as preventing far-left agendas from infiltrating the state’s public school systems.

In a statement provided to The Federalist, DeSantis championed the launch of the agenda, saying that “Florida has delivered the most student-focused, parent-centered education agenda in the nation” at a time when “curriculum in states around the country are being used as opportunities to indoctrinate innocent children.”

“Our school board members are on the frontlines of what happens in our education system. In Florida, we value student success, parental rights, and curriculum transparency, and we need school board members who do the same,” he said. “We need strong school boards who will fight for these values and put students first.”

3- More parents banning together to fight for their children. We can not stop fighting to protect our children. The left is after them with a vengeance.

QUOTE: On Wednesday, three Pennsylvania parents filed a federal lawsuit over what their children are being taught in first grade.

The lawsuit, which seeks an end to such lessons and requests unspecified compensatory damages, said this is not a political stunt.

“Rather, it is about Plaintiffs’ parental rights and each of their respective decisions not to want their 6- or 7-year-old child to receive first-grade classroom instruction on gender dysphoria or transgender transitioning from their first-grade teacher,” the lawsuit explained.

The lawsuit claimed the role of parents to oversee the education of their children is basic to all Americans.

4- Half of the states are trying to protect parents from being targeted by school boards.

QUOTE: Nebraska joined the ranks of states cutting ties with the National School Boards Association on Saturday, making it the 25th state to boycott the organization after the NSBA sent a letter to President Biden in September 2021 urging the federal government to use domestic terrorism laws to go after parents at school board meetings. The Nebraska Association of School Boards voted to withdraw less than a month after its executive committee voted to cancel its membership, the Omaha World Herald reported.

As states like Missouri, Ohio, and Pennsylvania began to drop out of the association almost immediately, the NSBA issued an apology for the letter in October 2021, but the public backtracking hasn’t stopped the mass exodus.

Nebraska politicians joined the state school board association in criticism of the NSBA letter, with Sen. Ben Sasse labeling the NSBA’s collusion with the Biden Justice Department a “political hack job” and Gov. Pete Ricketts insisting that following the letter’s requests would be an “absolute outrageous abuse of federal power” meant to “browbeat parents into not going to school board meetings.”

5- Canada has been a very dark and freedom deprived country for months. It is good to see that some of that is lifting and people are still fighting for freedom there.

QUOTE: Canada’s vaccine mandates for federal employees and domestic travelers will be suspended as of June 20, government officials announced Tuesday.

Also on June 20, travelers within Canada will not be required to show proof of COVID-19 vaccination to board a plane or train, although they will be required to wear masks.

QUOTE: Several groups are fighting Canada’s vaccine mandates, including one group of hundreds of federal public servants who sued the federal government in an effort to overturn the mandates for federal workers.

The group, which alleges the mandates violate Canadians’ constitutional rights, is seeking about $15 million in punitive and other damages, according to Kalman Samuels, a Montreal-based law firm representing the plaintiffs.

6- Two independent studies from Italy have shown that all the treatments we are currently denied in the USA to treat Covid-CCP at an early stage, are in fact working. Get all the details at Dr. Malone’s Substack.

The truth is that we may never be able to resolve this, to get to the bottom of what really went on, due to perverse political and financial incentives to over-report COVID-19 deaths (while also minimizing toxicity of the vaccines).  But there is no question that if you are admitted to a western hospital with a COVID-19 diagnosis, your risk of death during that hospitalization has been amazingly high.

QUOTE: There is no question in my mind that early COVID-19 treatment saves lives, and many different repurposed drug treatment protocols for treating this disease have become popular despite withering criticism and gaslighting from FDA, NIH, corporate media and hospitalist physicians.

For example treatment protocols, see those developed by FLCCC, Dr. Vladimir Zelenko, Drs. George Fareed and Brian Tyson , and the European doctors who practice under the banner of Ippocrateorg.org.  In just one example, while in the USA Ivermectin has been vilified by both FDA and the press, worldwide adoption of Ivermectin for treatment of COVID-19 disease is now at 45%!

While many of these alternative early treatment and hospital treatment protocols rely on drug combinations which typically include Hydroxychloroquine + Azithromycin (the combo championed by Dr. Didier Raoult) or Ivermectin, there are many other drugs and combinations which have shown substantial efficacy in both outpatient and inpatient treatment environments.

QUOTE: In conclusion, irrespective of the excess death and disease associated with the mandated genetic vaccines, there is no doubt in my mind that the concerted and coordinated propaganda and information control efforts of the United States Government Department of Health and Human Services, acting in alignment and as sponsors of Big Tech and Corporate Media censorship, have cost large amounts of unnecessary death and disease due to both iatrogenic causes during hospitalization as well as by suppression of life saving early treatment protocols. The data supporting this conclusion increase almost daily. The unresolved issue remains. Will anyone be held accountable for this avoidable tragedy?

7- When the Associated Press states that an event featuring Michelle Obama was “sparsely attended” you can bet that there were just a handful of people there.

Let’s just say, it was less than a …Trump rally.

Michelle Obama’s Get Out the Vote Event in L.A. ‘Sparsely Attended’ Despite Selena Gomez Appearance

QUOTE: While Obama’s organization has been working to increase election participation since 2018 when she founded the group, the Associated Press noted that the summit held in an L.A. soccer stadium was “sparsely attended.”

Obama started the group intending to stop the mythic “voter suppression” that liberals claim is endemic in American elections. But there is little evidence that blacks have been prevented from voting. In fact, according to the Pew Research Center, except for a small dip in 2016, black participation has grown in nearly every election since the Obama years through to 2019.

Still, since its founding, the When We All Vote group has been the toast of the Hollywood set and has numbered countless actors, directors, writers, and other denizens of Hollywood as members, co-chairs, and supporters.

8- Democrat women do not seem to be able to gather a crowd.

QUOTE: Democrats recently postponed a Kamala Harris fundraiser and moved it to the fall.

They couldn’t sell enough tickets. The DNC’s Woman’s Leadership Forum fundraiser on May 25 and 26 with Vice President Kamala Harris was rescheduled for lack of ticket sales. Ticket prices ranged from $250 to $50,000, according to the report.

You are not alone. We know it is hard to bear watching your country slide off into the abyss. We know you feel that you can’t help. But you can.

Protect your children and grandchildren as best you can from the left agenda.

Protect and improve your health.

Keep praying that God will guide us through this battle.