It has been a new world every day in Arizona.
Despite every conceivable roadblock, legal motion and hearings,
THE most historic and unprecedented audit of American ballots is still happening, at least at this moment. And it is on track to be completed by the deadline.
The Left is throwing the kitchen sink at this audit.
Our fellow Patriots in Arizona from their Senate, to the Grassroots, have remained strong and unwavering in the face of all the usual threats, name calling and legal tricks. The Drive By Media is fit to be tied and doing their best to fool the American people into thinking that the audit is just a bunch of nuts doing something crazy.
The Republican Party (RNC) is doing NOTHING to help. They are mute and sitting on the side lines as strong Republican State Senators, the Republican Grassrooters, the auditors, and honest attorneys and judges are fighting like champs.
What are all of these people so afraid of? What do THEY think the audit will find? Why would all of them not want to prove that the election was clean and without fraud and that Joe Biden won fair and square? Why are they fighting so hard to take away our right to look at the results?
By the way, many of those fighting are NOT Republicans or Trump supporters. They are PATRIOTS fighting for fraud-free elections!
21 Million ballots are being reviewed, scanned and studied, representing 65% of all the votes in whole state of Arizona. The audit is totally public. It is being filmed with nine cameras, 24/7. You can watch this happening live here: DefendingTheRepublic.org
We encourage you to follow the audit closely. It is extraordinary and historic and will have massive impact on our country and our future.
Here are some ways to keep up:
–Listen or watch Steve Bannon’s daily podcast: War Room.  Get it where ever you get your podcast.
Here is the Apple Podcast:https://podcasts.apple.com/us/podcast/bannons-war-room/id1485351658#episodeGuid=warroomimpeachment.podbean.com%2Fc97015dc-954e-300e-a38e-c2ccb41cce86
–Download the App TELEGRAM and follow Arizona Conservatives Take Action, @SidneyPowell, and The Professor’s Record (this is Dr. David Clements and he has been working hard on election integrity). You will get up to the minute information and ways you can help.
—Watch it live here: DefendingTheRepublic.org
Defending The Republic is proud to support the Arizona Audit. We look forward to supporting this process as it moves to other states. You have helped us do that with your donations and support. THANK YOU!
GOOD NEWS TO ARM YOU
1- Maricopa County Arizona is not the only place in the state fighting. Parents in Vail, Arizona rose up and got their entire school board to resign!  Then they elected a new board who immediately reversed a mask mandate on their children!
You will NOT read about this much in the Drive By News.
Check out the details here:

2- We all suspected this, right? Well, here is the proof! Big Tech worked in coordination with the Biden campaign to suppress information about the candidate.
QUOTE: “These new documents suggest a conspiracy against the First Amendment rights of Americans by the California Secretary of State, the Biden campaign operation, and Big Tech,” Tom Fitton, President of Judicial Watch said. “These documents blow up the big lie that Big Tech censorship is ‘private’—as the documents show collusion between a whole group of government officials in multiple states to suppress speech about election controversies.”
California Officials, Biden-Linked Firm Coordinated With Big Tech to Censor Election Posts: Judicial Watch
BY ISABEL VAN BRUGEN  April 28, 2021
More here: https://www.theepochtimes.com/mkt_morningbrief/california-officials-biden-linked-firm-colluded-with-big-tech-to-censor-election-posts-judicial-watch_3793973.html
—————————————————————
3- A colorful reality check. What’s happening to Kamala Harris?
QUOTE: Every Democrat with any self-awareness at all is defecating in his pantaloons over the Arizona audit, over which they have lost control and they know it.
https://www.americanthinker.com/articles/2021/04/kamalas_not_looking_so_good_lately.html
April 29, 2021
Kamala’s Not Looking So Good Lately
By Kirstin Stein
QUOTE: I suspect Mrs. Harris doesn’t have to keep pretending to be second in line to the head of the Executive Branch of government  for much longer.  Every Democrat with any self-awareness at all is defecating in his pantaloons over the Arizona audit, over which they have lost control and they know it.  If it turns out the way the red half of the country expects it to, the Dems are cooked.  Next up will be Pennsylvania, then Michigan, then Wisconsin, then Georgia.  Then there will be a countrywide, eardrum-bursting shriek of despair as the blue half of the country swoons and faints because that means (oh, the horror!) that Trump actually did win the 2020 election, and there will be a constitutional cataclysm the likes of which this country has never seen.
————————————————————
4- Having a difficult time convincing your Leftist family and friends that there is voter fraud?
Suggest that they watch this easy to understand 5:33 minute video.
Is Voter Fraud Real?
https://www.prageru.com/video/is-voter-fraud-real/
————————————————————
Fellow Patriots, please SHARE your knowledge and forward this to all the people in your orbits. Remember, there are more who love freedom than of those who seek to dominate and control us. The majority of people voted for freedom on November 3, 2020.
Sidney Powell and the Defending the Republic Kraken Team
P.S. OH! Don’t forget!!
The Kraken Logo Contest is in full swing!!
We have received many entries. Please have your entry submitted by Monday, May 3, 2021 at 5pm est. We need all of you creative, funny, and artistic people to help us with a logo!
This is not a meme. We need an official logo. We would like for it to depict The Kraken, or the idea of the The Kraken. It should be clean and easy to decipher. Use your imaginations! Make it an original. You can use just words or images.
We will pay the creator for the logo we select $500.00.
Submit your logo to this email address with the subject line: The Kraken Logo Contest
Kraken@SidneyPowell.com
PARTING SHOT
We had to share this.
There are NINE cameras covering the audit.
The cameras are live streaming every move, 24/7.
But, here is the CNN headline: “completely secretive recount” ! 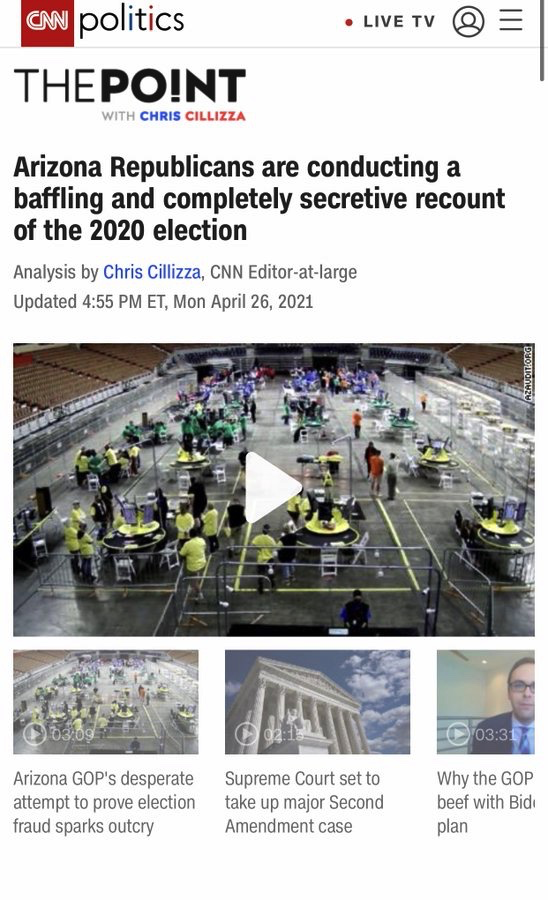